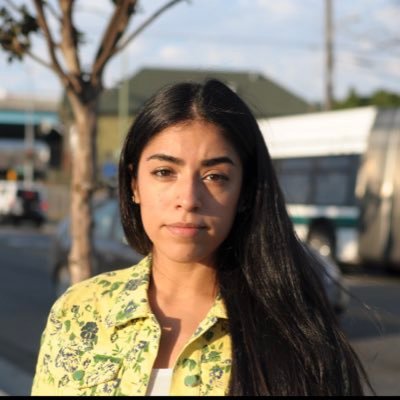 Focused, direct, and with just as much energy for mutual aid organizing as the incumbent has for trash

TL;DR: A young housing activist and organizer with an edge and a front-facing camera that she’s not afraid to use

Zoe Lopez-Meraz is one of two progressive challengers in the District 5 Council Member race. Lopez-Meraz moved once a year as a child due to housing insecurity. Her profession is listed as “Medical Coordinator” on her filing forms. She worked as a Human Factors researcher for Eyefluence, a tech company that was acquired by Google in 2016; according to her LinkedIn, she may still work there. Lopez-Meraz frequently posts about doing outreach and giving out supplies at homeless encampments throughout Oakland.

Zoe Lopez-Meraz has four main issues: housing, defunding the police (covered in the next section), protection for essential workers, and environmental justice.

Lopez-Meraz has repeatedly said that making sure people have housing is her main reason for running (see this video, starting around 1:28:00). On her official campaign website, she calls for immediately housing unsheltered people in hotels as an emergency measure and then working to find stable housing for them, decriminalizing sex work and houselessness, stopping landlords from refusing housing vouchers, supporting Prop 15 to gain money from commercial property, and supporting development only conditionally. In a candidate forum, Lopez-Meraz said, “We are not scarce in housing units, we are scarce in elected officials with a conscience,” and cited a storied (but powerful) statistic that Oakland has 4 empty units for every unsheltered person.

Like fellow candidate Richard Raya, Lopez-Meraz also endorses the Black New Deal as part of her proposal to support essential workers. As part of this proposal, she wants to abolish ICE (technically not within the City Council’s purview), increase hazard pay, and give out free PPE. She also supports the “Good Jobs Policy,” which appears to be a reference to an initiative supported by the East Bay Alliance for a Sustainable Economy.

Defunding the police is a major cornerstone of Lopez-Meraz’s campaign. She says she will cut $132 million from OPD’s budget (this is half of what they currently get) and work with “system-impacted families” to help them get resources.

As far as we can tell, Zoe Lopez-Meraz has not made any public statements about the proposed A’s stadium at Howard Terminal.

* (We’re working on this! still learning, will share when we have some answers!)

* (We’re working on this! still learning, will share when we have some answers!)

Main vibe: Confrontational activist with boots on the ground

Busy doing the work vibes: Zoe Lopez-Meraz frequently posts on her Twitter and Instagram about political actions she participates in and mutual aid organizing she’s doing. In an election cycle where candidates’ commitment to community engagement seems recent (or even sus), we love the way Lopez-Meraz isn’t just talking about housing but building it. No need to check Lopez-Meraz’s activist credentials; she’s good.

Gonna get Gallo vibes: Zoe Lopez-Meraz explicitly calls out incumbent Noel Gallo’s “conservative perspective that believes more policing is the solution to security” on her official campaign website. She also confronted Gallo and his team at a food distribution event with signs that asked, “Gallo, where were you in April? May? June? July?” in both English and Spanish. (These are pretty good questions given that Gallo was on the record in late May saying he wasn’t worried about the virus as case numbers in his district climbed; in Gallo’s defense, he does volunteer with different food banks pretty regularly.) While this direct and dogged energy may not win over the respectability police who run City Hall, we here at the Oakmtg Appreciation Club are living for it!

Maybe doesn’t know anyone older than 30 vibes: In an incredible four part video, Zoe Lopez-Meraz uses the word “sus” and then calls out “moderates” who may not know it means “suspect.” Here “moderate” is a pretty obvious code-word for “older person.” While this made this Oakland resident laugh, we worry it means she may not know any older progressives??? Zoe, reach out! We’re pretty old (comparatively), we love your progressive ideas, and we do know what “sus” means.

Needs to stop taking campaigns videos while she’s driving vibes: Okay, this is how you know we’re old, but for real, it stresses us out!

Almost warm-and-fuzzy progressive cooperation vibes: On September 5, 2020, Zoe Lopez Meraz and fellow D5 candidate Richard Raya released a video together explaining how ranked choice voting works and encouraging their supporters to rank the other candidate second. Just a few days later, however, Lopez-Meraz seemingly subtweeted Raya after he received a slew of endorsements from progressive organizations. While not a direct rebuke of Raya, it did make this Oakland resident wonder how sincere Lopez-Meraz’s commitment to progressive causes over personalities is.

An earlier version of this candidate profile incorrectly stated that Zoe Lopez-Meraz entered the race before Richard Santos Raya. We updated the profile on 10/8/2020 to correct this information. We regret the error.