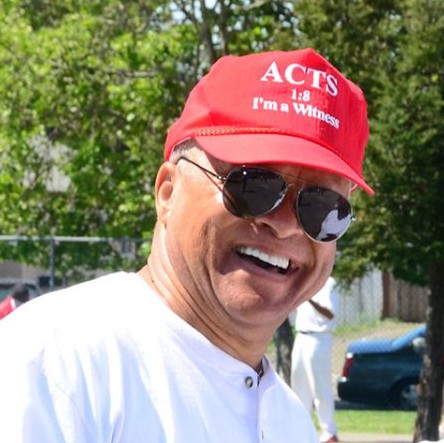 But have you tried NOT being gay? or NOT getting coronavirus?

TL;DR: A conservative faith leader who comes with some bad friends and gives us worse vibes

Bishop Robert “Bob” Jackson is the longtime pastor of Acts Full Gospel Church of God in Christ, a community activist, and an affordable housing developer. In May 2020, Jackson’s church hosted an in-person rally against COVID-19 restrictions organized by a pastor who believes in “gay conversion therapy.” He has not participated in any candidate forums as far as we can tell.

Because Jackson has not attended any candidate forums, our information on his platform is limited to his official campaign website. Broadly, Jackson is running on a platform of change with a focus on economic issues, housing, and safety and cleanliness.

Most of Jackson’s economic growth policy comes down to using the City Council’s power to funnel public money into local businesses. He wants to close the wealth gap, but oddly puts it in scare quotes (e.g., “wealth gap”) as if he doesn’t believe it really exists. Jackson believes economic recovery in the district will require improving all neighborhoods’ access to job opportunities. He would promote apprenticeship, internship, and mentoring programs to give the district’s students more access to the labor market. He believes business improvement districts would improve small businesses’ access to capital, especially for those owned by women and people of color. Finally, he wants to make sure investors who want to build in District 7 employ district residents and to try to make city government easier for small businesses to navigate.

On housing, Jackson argues for building more units at every price point, using a combination of market-based solutions, creative investment vehicles, and government support. He would aim to create a Homeless Commission and partnerships with non-profits, developers, and businesses and also argues for funding mental health, drug treatment, and job programs that address the root causes of homelessness; we’ve heard no word so far on where that funding would come from. Jackson, observing the negative health outcomes from traffic in the district, says that the city must promote housing that encourages people to shop and work near their homes, improve mass transit access, and reduce the number of cars on our highways. Again, but how?

Jackson argues for community policing models and for tackling the systemic racism that underpins economic and criminal justice inequality in our community. “Defunding the police would allow trained experts in domestic violence, mental health, homelessness, addiction, and blight to more effectively deal with these issues, while freeing up police officers to tackle more violent and property crimes and gang activity.” He has not, as far as we can tell, committed to a specific number for defunding the police.

Main vibe: We regret to inform you the vibes are very very bad vibes

Ready to sell the city wholesale to developers vibes: While we can’t say this for sure, a lot of Jackson’s language implies that he’s working to roll out the red carpet to business owners and corporations in hopes that the wealth will “trickle down” (scare quotes intentional). When he says he wants to “help lure new businesses to the city by making city government easier for businesses to navigate,” we hear, “I want to roll back the regulations that protect the city from predatory developers”. When he talks about giving people “opportunities” to “support themselves,” we hear, “I’m going to make government support for vulnerable communities conditional because I think poverty is a moral outcome.” We may be wrong! Read it for yourselves. But there’s enough coded Reagan-esque language in there to make us skeptical about how this candidate thinks about the mechanisms of wealth distribution!

All the wrong friends vibes: While Jackson’s endorsements page is not exactly a Who’s Who of Oakland’s most conservative, pro-policing, and possibly-corrupt elements, it’s close enough to make us nervous! While Jackson hasn’t shared an official campaign platform on environmentalism, one of his endorsements comes from coal advocate and developer Phil Tagami, and we interpret his policies to be pro-developer probably to the detriment of public interests. (Tagami famously defended his downtown buildings from Occupy Oakland protesters with his own gun and tactical vest, and, rather than being charged or even ashamed by his action, can be seen speaking quite frankly about them in this video on the Museum of Oakland’s website.)

Not going to show up at Pride vibes: Bishop Bob’s church hosted a pro-conversion therapy pastor in MAY 2020. Enough!

Not going to follow the rules vibes: Jackson also does business with the city as an affordable housing developer, and in 2018 he broke the Oakland Campaign Reform Act twice by donating to a candidate for office when he was negotiating a city contract. In this case it was harmless because his favored candidate didn’t win, but it doesn’t exactly make us confident he’ll be ethical as a council member.