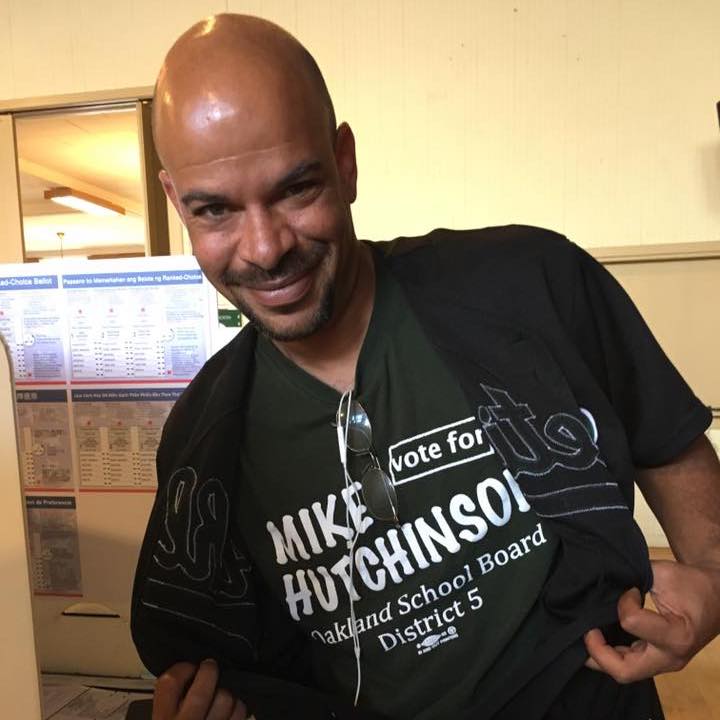 A militant public school crusader who eats, sleeps, and breathes OUSD Board business

This is the third time Mike Hutchinson has run for the D5 OUSD seat–in 2016, he secured 15% of votes, coming in third place. He was born and raised in Oakland by his mother, who was a teacher, and comes from a long line of public education activists. He worked for OUSD for 20 years before becoming a community organizer and education justice advocate. He is also the co-founder of Oakland Public Education Network (OPEN), which advocates for quality public schools and keeps the community informed about board meetings and decisions. He attended Crocker Highlands, McChesney, Oakland High, Skyline, and UC Berkeley. He does not have children, but he has a niece attending a school in OUSD.

Hutchinson’s involvement with OUSD issues increased significantly in 2012, when two of the schools he’d worked in for over a decade were closed down. Hutchinson is well-known as an activist and has a reputation for speaking on all agenda items at Board meetings during public comment. He has a lot of passion, but his approach can come off as aggressive, particularly at Board meetings, though to be fair, those have a tendency to generally become loud, angry, and even violent.

On his official website, Mike Hutchinson outlines four actions he plans to take if elected to the OUSD Board. He intends to 1) Stop school closures and fully audit OUSD, 2) Create authentic and inclusive community engagement, 3) Support and strengthen traditional public schools, and 4) Ensure quality schools in every neighborhood by building Sustainable Community Schools. The order of operations is a bit confusing, given how OUSD must currently meet a variety of criteria from FCMAT in order to prevent school closures. However, in candidate forums and in questionnaires, Hutchinson has the most detailed approach, of all candidates, to a variety of issues.

The Budget and Fiscal Crisis Management and Assistance Team (FCMAT)

Hutchinson has the most detailed budget plans of any of the candidates and outlines his approach clearly in the Oaklandside candidate questionnaire. He plans to first stop the Blueprint for Quality Schools in order to stop the closing of schools, co-location of schools, and selling of OUSD property. He has not offered how he intends to follow through with that plan. He will conduct a forensic audit and reprioritize the budget. Multiple times in candidate forums, he has brought up that there is a $50 million surplus in the OUSD budget. There was a dispute between Leroy Gaines and Sheila Pope-Lawrence and Hutchinson at the LWV candidate forum as to whether the $50 million is a surplus or a prudent reserve for the district. (Both Gaines and Pope-Lawrence say the reserve is necessary). In the Oaklandside questionnaire, Hutchinson states the amount of profit is $70 million–this is either a typo or intentionally misleading.

In his Oaklandside questionnaire, Mike says schools should follow CDC protocols, and then offer PPE to students and teachers when they do open. There should also be protocols in place for when someone has COVID. He stressed that any distance learning should be equitable and 100% accessible regardless of income, language, or ability. But in the Action 2020 forum, he whistled a slightly different tune. He mentioned doubling or tripling classroom space and staffing, but that requires even more money. He asserted, “A split schedule isn’t acceptable… Virtual learning doesn’t work. We need to address equity in the schoolhouse, but we can’t do that without the schoolhouse.” He stressed the need for conversations between families, the community, and OUSD to come up with the best temporary solution. This seems like an additional lofty and expensive goal in a time when there are calls from the state to sell off OUSD property and condense schools due to under-enrollment.

Oakland has the most charter schools of any school district in California. Hutchinson is anti-charter school and says he will enforce AB 1505, which gives the school board the ability to veto new charter schools, limiting their growth and strengthening the renewal process to close underperforming charter schools. He plans to close down the 7-11 committee, which sells OUSD land after school closings take place.

Hutchinson denies that OUSD is under-enrolled. In the Oaklandside candidate questionnaire, he points out that enrollment has been flat for the past five years. He still wants to grow the public school system. To win back students, Hutchinson plans to pilot Sustainable Community Schools, “especially below 580.” He outlines six pillars of the SCS model: 1) Engaging, culturally relevant and challenging curricula, 2) High quality teaching, not high stakes testing, 3) Wrap-around supports for every child, 4) Student centered climate, 5) Authentic parent and community engagement, 6) Inclusive school leadership. In our opinion, a lot of his solutions echo those of Jorge Lerma’s, but Hutchinson’s have more structure with some models in other schools to adapt.

Hutchinson has a long list of endorsements from powerful places. It’s a LONG list, so here are a few highlights:

Main vibe: Essentially acting like an OUSD Board Director already. As he says during candidate forums, Mike Hutchinson attends every OUSD Board meeting. At a June 10, 2020 OUSD meeting that one of us attended, he spoke on nearly every item of the agenda, often to criticize Directors. After running for this position three times and failing to be elected, Hutchinson has basically started doing the position anyway, and our guess is he’ll likely continue even if this election doesn’t work out in his favor too.

“Throwing shade at his competition” vibes

In the Action 2020 candidate forum, Mike openly laughed (around 55:00) at Sheila Pope-Lawrence’s confusion about the role FCMAT has played in the district, as she brought in her experience from other districts and revealed her ignorance of the control the agency has here. In the same forum, he also called out both Pope-Lawrence and Leroy Gaines, claiming that he had never seen either of them at a Board meeting. Hutchinson might be the most qualified candidate to steer the OUSD ship, but that doesn’t mean he’ll be nice about it.

Da Vinci Complex Vibes. Hutchinson has a lot of passion, but he also has a bunch of unfinished projects, including multiple websites. If it matters to voters who want OUSD members to be credentialed teachers or school administrators, Hutchinson does not have a college degree and was never officially a teacher at any point in his decades of work with schools. That said, he has been dedicated to attending virtually every OUSD meeting over the last 8 years. If OUSD is his Mona Lisa, he’s stuck to it.