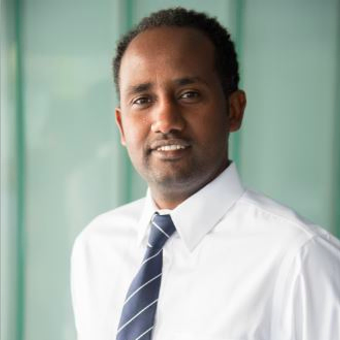 TL;DR: An Eritrean refugee with a cosmopolitan view but not enough grounding in Oakland-specific policies

Meron Semedar is not seen as a leading candidate in the race for the District 3 Council seat, though he is thoroughly impressive and could bring a significantly different perspective to the host of issues plaguing District 3. However, the policies he lists on his website are vague, so this former D3 resident is concerned about how he would create concrete plans to address those issues. He has not participated in any candidate forums that we have seen.

Semedar is an Eritrean refugee and his primary work focuses on refugee advocacy. He has a degree in Engineering and an MA in International Studies from USF. Semedar grew up in a war-torn country that fought for its independence from Ethiopia. Forced to flee Eritrea when its only university closed under a dictatorship, he moved first to Sudan and then South Africa in search of a better education. Under the deep-rooted systemic racism of South Africa, Semedar saw the xenophobic treatment of other Africans by Black South Africans, and started his career in refugee activism. He moved to Oakland in 2012 and was granted asylum in 2013. He became a US Citizen in 2019.

Semedar’s profile is fascinating in that he has a truly global perspective on the issues facing District 3. He has led nonprofits and spoken at international conferences that also featured speakers like Bill Clinton and former UN Secretary General Kofi Annon. There is a full profile of him on the University of San Francisco website. He has written a variety of articles featured on The Huffington Post. He is currently active in the East Bay Refugee and Immigrant Forum (EBRIF), Student Outreach for Refugees, Asylees and Immigrants (SORAI) at the University of San Francisco.

Semedar supports requiring a percentage of new apartment housing to be affordable. He also wants to stop City Council from providing permits to developers who do not comply with providing affordable housing. In terms of helping the homeless, Semedar says, “My policies will look into a holistic approach of fixing our homeless situation. Providing the necessary care (mental, physical), the necessary training for jobs, and then transitioning them to be self-sufficient and to never be homeless again. In the meantime providing a dignified treatment of sanitation.” This is quite vague as he doesn’t break down how this would work with a proposed budget.

Semedar flags the flat tax rate for all corporations as a major issue for his campaign platform. Semedar is in favor of Nikki Bas’ measure that will go on the ballot in 2022, which would change taxes based on company gross receipts. He argues this tax structure will encourage more businesses to come to Oakland and provide more jobs.

Maron is a do-gooder who is laser-focused on humanitarian rights. While his policies are vague, he is coming from a place of good intent and is clearly an over-achiever. He is not a leading candidate this year, but this race could potentially increase his profile in the city beyond the smaller circles he runs with.