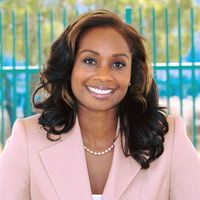 Ready to solve our city’s woes with fiscal fantasy

TL;DR: A frequent candidate with a history of political scandals who wants to take on OPD but make it tech

Marcie Hodge, PsyD, was raised in Oakland and went to Merritt College, Cal State Hayward (now East Bay), and Alliant International University. She’s a former clinical case worker for the county, the executive director of a group home for boys with mental and behavioral health challenges, and a frequent candidate for local office. In 2006, she ran for Council Member in District 6 against incumbent Desley Brooks and lost. In 2010, she ran a controversial campaign for mayor; she lost with just over 3% of the vote. In 2016, she ran against incumbent District 7 Council Member Larry Reid; she lost with just 25% of the vote. She was on the Peralta Community College Board of Trustees board from 2004-2012 where she was admonished for using the District credit card to make personal purchases. She is the only District 7 candidate who’s held city office before. Her brother, Jason Hodge, is also a frequent candidate for public office in Oakland.

On housing, Hodge says she wants Oakland’s affordable housing percentage relative to market rate to be closer to 30% (by our estimates, this is currently 7%). To mitigate displacement, Hodge wants:

Hodge argues that D7 needs fast-growing industries—biotech, healthcare, green technology—as well as rezoning to bring in global businesses and attention to blight issues that make the district less attractive to businesses. What she means by blight, however, is homelessness, as she shows in an August 15 interview with Ken Houston (see this video starting around 13:00). In that same interview, she applauded Dan Kalb’s plan to remove the cap on fines for illegal dumping and called for installing city cameras to overlook common dumping sites. She thinks fining, ticketing, and community watches are likely to prevent illegal dumping. She observes that the district overall needs a higher density of grocery stores and shopping areas.

Asked in an interview how she would address violent crime in District 7, she argued that residents, the Police Chief, and OPD should collaborate on identifying the causes of violence, then pick up the level of patrols. Police aren’t very responsive in the district, she observes, and there has been a downtick of response time. She is concerned that there is a culture of not calling police to deal with violence, saying, “The whole idea of snitches, we have to work on that.” She would like people to be able to post a potential crime to something like Citizen App so that neighbors will be aware when something doesn’t look right. She would support cameras to deter illegal dumping and an increase on fines and enforcement for dumping as well.

Despite her claim to be in favor of reforming the police, we generally view Hodge as a pro-police candidate because she supports more police patrols, encourages neighbors to call the cops, wants to use more technology to call the cops, and install more surveillance cameras throughout the city.

Like the other candidates for D7 (with the exception of Jackson), Marcie Hodge opposes moving the A’s stadium to Howard Terminal and thinks the A’s should develop the area around the Coliseum. She is against selling public land because it “robs” residents of their investments. In fact, she says she thinks the Howard Terminal project is a “smokescreen” for the A’s to buy time and a parcel of city land while they prepare to leave; she even goes so far as to say she does not think the A’s even want to move to Howard Terminal (see this truly remarkable video, starting at 22:00).

Main vibe: Successfully getting everyone to forget her long history of local political scandals

After Googling “Marcie Hodge” in an effort to find her official campaign website, this Oakland resident stumbled upon a trove of articles depicting Hodge’s controversial forays into local politics:

We’re surprised that local new sources didn’t fill in any of this context in their coverage of this year’s election; maybe Hodge has a neuralyzer up her sleeve.

Not going to do the homework vibes: Hodge is the only candidate for District 7 Councilmember to have held office, but colleagues from her time on Peralta’s Board remember her as not paying attention and frequently absent, vibes we hope she wouldn’t bring to the Oakland City Council. She also seems to have incorrectly filed her statement of economic interest forms during her past campaigns.

Creating a seamless user experience for BBQ Becky vibes: Hodge’s bizarre pro-snitching comments and ideas about how to combine OPD’s existing surveillance with the technological aspects of NextDoor and Citizen make us skeptical of her claims to be pro-police reform.

Understands the value of public land vibes: We like how strongly Hodge rejects the idea of selling public land. Unlike many candidates, she seems to really get that public land should be used for public good (see this video, starting around 19:50).