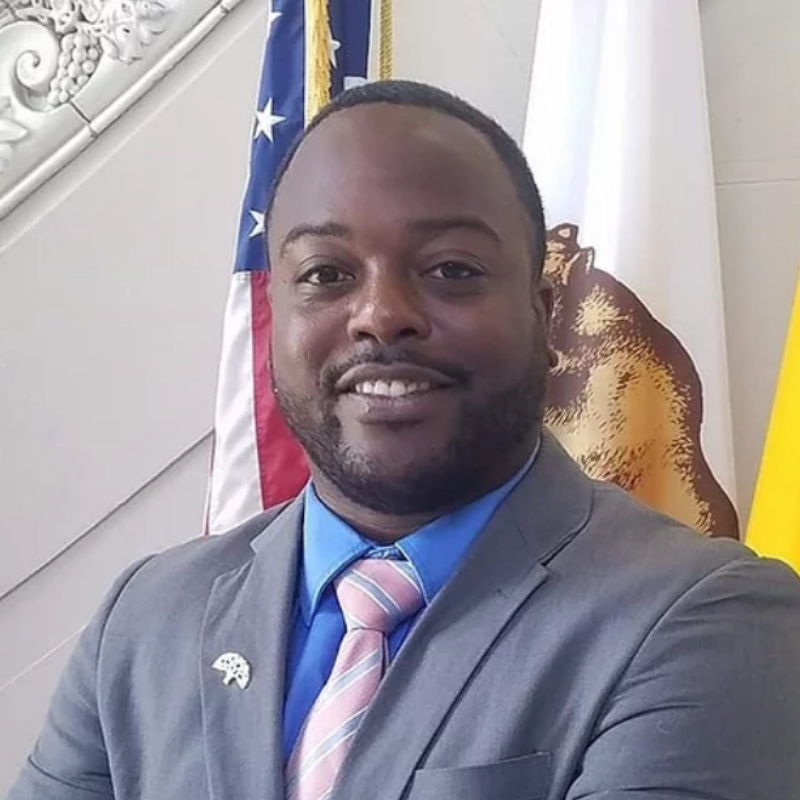 TL;DR: A frequent political candidate with a confusing punitive outlook who can’t stop talking about the Hegenberger Tourism Zone

Marchon Tatmon describes himself as a certified domestic violence counselor, businessman, and public school advocate. He works with SF/ Marin County Food Bank and also is a financial advisor and insurance agent. He is in his last year of a doctorate in public administration.

A frequent flyer on the Oakland candidate circuit, Tatmon ran for mayor in 2018 (where he placed 4th out of 11) and for Alameda County Central Committee in March 2020 (where he received 14,559 votes, or just under 3% of votes cast). When he was in high school, Tatmon interned for outgoing Councilmember Larry Reid. He’s associated with People-Powered Progressives, a slate of community-based advocates working to make the Alameda County Central Committee more progressive. He is currently a Commissioner on the City of Oakland Budget Commission.

Tatmon, who has worked for Building Futures, an organization finding emergency housing for homeless people, says, “We need to keep Black people, the people who built the city, in the City.” You can hear more about his work in this interview from 2018, when he was running for Mayor.

His plan for addressing displacement:

While these all sound good, Tatmon is light on concrete proposals for how to achieve these outcomes. He also suggests that there may be policy solutions to stop gentrification, identifying the recent vacant parcel tax and proper valuation of public land that could be used for affordable housing as keys to solving the housing crisis.

Tatmon is particularly interested in developing what he dubbed the Hegenberger Tourist Zone, to create jobs and investment opportunities. He believes low-interest loans to people of color starting small businesses should be a part of the district’s development plan. He would create a “capped” sliding scale for taxes that will benefit every business (particularly small business); the more companies that come to Oakland, the lower the tax burden will be for businesses. (He supported the progressive business tax that the Council heard and then postponed this year.) He would influence businesses to relocate to Oakland by offering incentives and temporary tax breaks, especially tech companies and companies that hire Oaklanders first. He would eliminate barriers to employment for Oakland residents, especially formerly incarcerated and young people by supporting reentry programs, trades, STEM, and college assistance.

Marchon Tatmon’s stance on policing is confused and mostly punitive overall. It’s confusing because he says many of the right things. He says he would defund OPD and promote restorative justice in Oakland and the community as a whole, focusing on youth rehabilitation, learning, and community healing. In the end, we think his stance is punitive because he also says he would promote patrolling dumping hotspots more frequently and deploying more resources and officers to catch those involved. He would make calling the police for non-emergencies an infraction in which a fine will follow to decrease the drain on city resources. He seems to have done less research than other candidates on how the police work and how to solve the problems police violence creates.

Like the other candidates for D7 (with the exception of Jackson), Tatmon opposes moving the A’s stadium to Howard Terminal and thinks the A’s should develop the area around the Coliseum.

Main vibe: Reimagine Hegenberger. Tatmon has been running for office in Oakland for years now, but the policy we most associate with him is the proposed Hegenberger Tourism Zone. Which tbh is a great idea but not exactly the most important issue facing the city (or even District 7!). Regardless, it sounds fun!

Graphic design is my passion vibes: Marchon Tatmon’s official campaign website is a wild ride with a poorly cropped header and an autoplaying video that this Oakland resident found delightful but hard to navigate. It’s tough to read a lot of the text, but if you scroll to the bullet points at the bottom of this page, you can find most of his proposals.

Maybe into restorative justice vibes: Tatmon’s experience in politics and organizing comes through in his policy proposals, but not nearly enough! Take his stance on illegal dumping. We love how he’s the only candidate with a policy proposal to discourage illegal dumping (by decreasing the cost of legal dumping), but we don’t love how he also thinks sending officers to patrol dumping hotspots doesn’t contradict his reformative justice stance. Many of his policies seem a little confused or contradictory, and we’re not sure what kind of Councilmember he’d be if elected.

Ideas-person vibes: From young adulthood through today, Tatmon has been involved in Oakland politics, but we don’t feel like that experience is on display in his campaign. Despite serving on the City of Oakland Budget Commission, Tatmon’s discussions of the budget are pretty high-level. We’d love to see him go deeper into the weeds beyond just saying that the community should have more input!