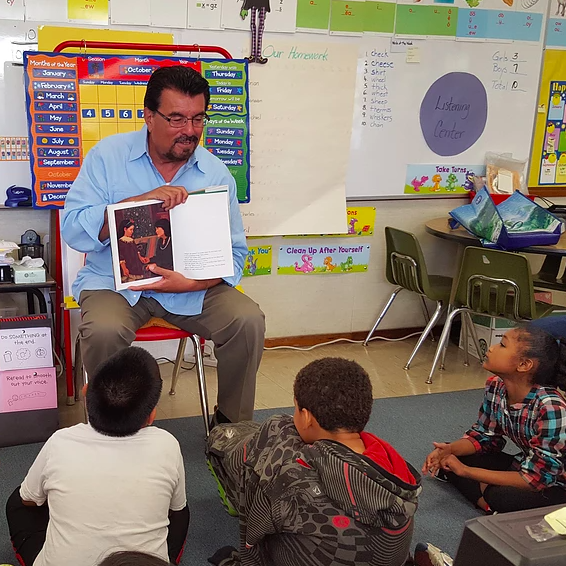 Your favorite uncle who hates OPD and SATs

TL;DR: Your uncle with lofty goals to overturn the system with equity and alternatives to the SATs

Jorge Lerma is an Oakland-born lifelong educator, former principal and school administrator for various OUSD schools. He has teaching credentials for both elementary schools and high schools, a master’s degree in science, and an admin credential for supervising education programs and schools from grades K-12. His family moved from West Oakland to Fruitvale when he was young, and he attended Fruitvale School, Bret Harte Middle School and Oakland High School before moving on to higher education. He’s currently the President of the Educational Coalition for Hispanics in Oakland (ECHO), working with the OUSD equity office to produce Latino honor roll recipients. He co-created Centro Infantil de la Raza, a daycare center affiliated with OUSD, and co-founded La Escuelita Elementary School. He is also the D5 representative of the Community Policing Advisory Board (CPAB). He has a son and daughter, who were both educated in D5, including at Centro Infantil de la Raza.

Lerma’s platform is all about racial equity, embracing D5’s diversity, and changing the culture of the school district. His top 3 priorities– standardized testing, creating a “full-spectrum” curriculum, and holding OUSD accountable for hiring more teachers of color– are all based in the idea that coming together as a community means fairly evaluating and encouraging students, giving them lessons that meets them where they are, and offers teachers and mentors that look like them and give them role models. He wants to attract and retain talent by making OUSD an institution that can offer teaching credentials. He thinks this will establish equity and help include immigrants and families that speak other languages. He has big dreams about taking back OUSD from the state’s control. He wants people to consider the school to be a true community center, a safe haven for students, open to both children and parents to give them resources they need.

Standardized testing repeatedly comes up as Jorge’s main priority. He speaks to research on the gap in performance between students of color and from low-income backgrounds and more privileged students on both state tests and the SATs. He wants to instead establish a “holistic, full-spectrum curriculum that favors student-centered instruction.” He expanded on this idea at the Action 2020 candidates forum, saying these would include ethnic studies, Black studies, women’s studies, and reintroducing the arts, among others. By offering an expanded curriculum, Lerma asserts, students will be able to perform well in areas outside of state and national standards, which will boost their self-esteem, help diagnose learning difficulties, and strengthen grades to improve the chances of continuing on to higher education.

As of his completion of the Oaklandside candidate questionnaire, Lerma did not think we should re-open schools until there is a vaccine or cure available. He said more must be done to improve the quality of distance learning, and that the City should ensure all students have hot-spots and access nodes. He also believes all lessons should be available in multiple languages, 24/7, such that parents can assist children with pre-programmed content or teachers who work in shifts, regardless of parent working schedules. At the Action 2020 candidates forum, he discussed (about 12 minutes in) more tactical solutions. When schools do open, he believes that it will be an opportunity to reimagine what schools look like. He thinks OUSD will need to work with the City to find public space in order for students to be appropriately distanced from each other. At this juncture, the idea that OUSD must close down more schools does not make sense to him given the need for distancing. He still thinks remote learning will need to come into play, especially at the onset of opening.

The Budget and Fiscal Crisis Management and Assistance Team (FCMAT)

For those unfamiliar, in 2003, the state took over OUSD and have imposed fiscal requirements in order to regain full control of how the district is run. There is hot debate between candidates as to how to deal with FCMAT, with some candidates more familiar with the situation than others. Lerma lists OUSD’s failure to maintain a budget and meet FCMAT’s 20 criteria imposed by the government entity as the biggest challenge the school district faces. In Lerma’s Oaklandside candidate questionnaire, he places the blame on the school board for failing to prioritize meeting the criteria and failing to “be present and give direction.” Lerma’s solution is to replace OUSD’s “antiquated and obsolete” budget and accounting department and give dedicated and constant oversight of the budget (he doesn’t say who will oversee it). According to his responses during the Action 2020 forum, he also wants to mobilize the community to take to Sacramento to make their case that the school board should regain control of the schools and negotiate less strict protocols. To make room in the budget, Lerma says there are a lot of misappropriated resources. He would prioritize teachers and direct student needs, then “find something to throw off the ship,” given the large internal resources the district has. He has also said that he doesn’t want to get into the weeds publicly, he just wants to take control of the situation so that parents aren’t forced to watch the mess.

One third of all Oakland students are enrolled in charter schools. Lerma supports a moratorium on charter schools, pointing out in his Oaklandside candidate questionnaire that they have taken $55 million of public funds away from OUSD. He believes that all schools that work in conjunction with OUSD should adhere to the same administrative accountability and regulations. Lerma has spoken in candidate forums about his opposition to spending public money on private enterprise. In his experience, the charter schools are anti-collective bargaining, anti-special education, and often do not admit foreign language students. He proposes charter schools should leave their corporate sponsors and return to OUSD. He’d like to make the structural improvements to the district that he has proposed, including early childhood education programs and preschool, and invite students who have left the district for charter schools back on the guarantee that they will enjoy an improved learning environment. He again speaks to the role of the school changing to that of “learning malls” that offer adult education, career and job recruitment, and parenting classes for families.

We couldn’t find any endorsements at this time! Activist vibes: Lerma is all about radical change, and we love his fresh perspective on overhauling the school district, which it honestly needs. From the sweet “Justice for Janitors” poster in his background as he Zoomed into the LWV candidates forum to his desire for systemic racial justice in the education system, he brings the passion and spirit to make change. He is also anti-OPD (as are all of the candidates); while he’s got a lot of great lines, one of our favorites is, “I would like to see OPD cook pancakes and sell cupcakes to buy computers.”

Your favorite tio vibes: Lerma’s passion for making OUSD better for the students comes across fiercely when he speaks. It’s very clear he wants to make the system work for children instead of watching more students struggle and fail to meet the system’s standards. As the only self-identified Latino candidate running for this seat, he understands the need for bilingual education in D5, where Spanish is commonly spoken and ESL classes aren’t available in many charter schools. It’s also very sweet to watch him speak about “those little guys and girls” being the future, as he referred to them in the LWV candidate forum.

Big dreams vibes: While we love his goals, Lerma wants to enact a LOT of change, which will be costly and take time. The concern is that he is biting off more than he can chew, leading to over-promising and under-delivery, which would be crushing but not surprising to many parents who have been disappointed by the school board for decades now. That said, any steps in the direction that he envisions for OUSD would be vast improvements over where the district is now.