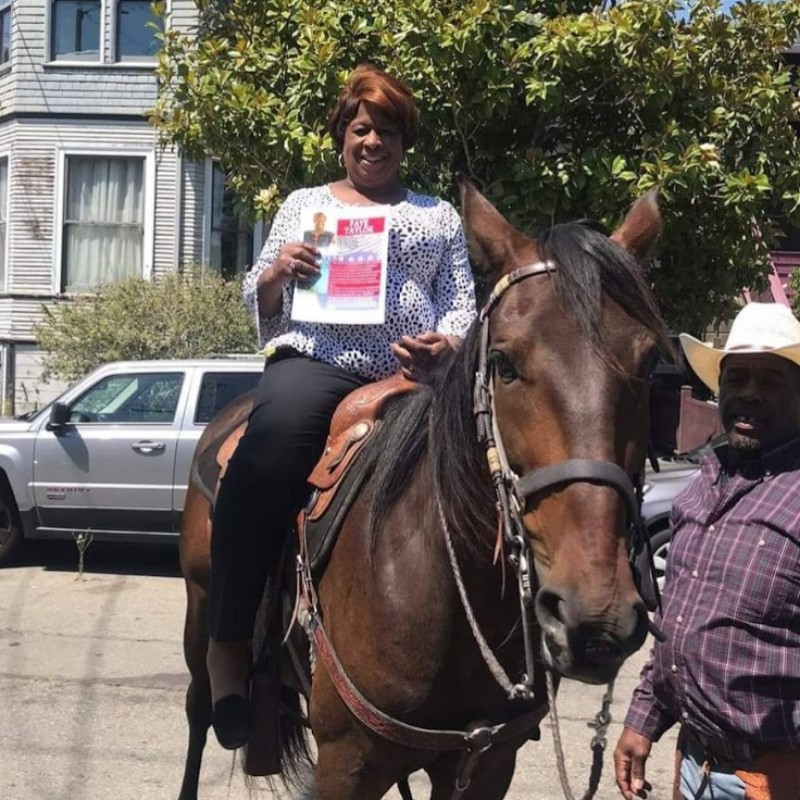 TL;DR: A candidate running an analog campaign who probably will not win but has our favorite campaign candids

Taylor is not seen as a major candidate in the D3 race. She has very little online presence and instead distributes flyers in person. This profile was updated on 9/12/20 to reflect a newly published Oaklandside article that features Taylor.

Taylor is listed as a “Longshoreman” on the City of Oakland 2020 Election Qualified Candidates list. Taylor did not file with a party preference. She is on the advisory board of the West Oakland Senior Center. The Oaklandside article speculates that Taylor may be the only candidate in the race that grew up in West Oakland; as discussed in another candidate profile, there is virtually no information available about Alexus D. Taylor, a mysterious competitor in this race. Taylor may have the support of fellow dockworkers and union members, particularly with respect to her thoughts on Howard Terminal.

Taylor is skeptical of the Reimagining Public Safety Task Force’s effectiveness, but would support a “mental health section” of OPD to serve unarmed except for stun guns. (For the sake of clarity: the Mobile Assistance Community Responders of Oakland, or MACRO project, is a small pilot run by the Department of Violence Prevention that is not officially part of the Oakland Police Department, but the Oaklandside article featuring Taylor seems to conflate her support of building a mental health unit within OPD with the MACRO pilot).

Taylor believes that the root cause of police violence is not due to the culture of policing generally, but due to the racist nature of the culture at OPD. The vast majority of OPD officers are white or Latinx, and as the Police Commission selection committee has agonized over in every candidate interview this year, there have been no Black female OPD recruits for years. Only 10% of the OPD force actually lives in Oakland.

Controversially, Taylor opposed the firing of former OPD Chief Anne Kirkpatrick, saying, “police like her, and I haven’t heard anything that she’s done wrong.” Kirkpatrick has sued the City and was recently eviscerated in a federal monitor report for mishandling the murder of an unsheltered man. She was fired for withholding information from the Police Commission and backsliding on federally-manded goals to meet the Oakland Negotiated Settlement Agreement of 2003 regarding police misconduct.

Taylor says her main fight is against inaction in the neighborhood by city officials. Taylor says her neighbors can’t afford to live in the new luxury apartments being built in West Oakland and supports policies like the Tenant Opportunity to Purchase Act being explored in Berkeley, which gives renters the first opportunity to buy their building when it’s sold. After that, she believes publicly-owned housing should go to the U.S. Department of Housing and Urban Development (HUD) “to try to keep it in the community.”

Taylor would also like to expand renter protections, particularly about landlord harassment and discrimination against longtime Black renters in the neighborhood. She first saw the extraordinary power the sheriff has to carry out evictions when witnessing the Moms 4 Housing protest led by her opponent Carroll Fife. She described the tanks on Magnolia Street as “a war.”

Taylor has the firmest stance on the fate of the A’s amongst all District 3 candidates, and one of the most even amongst others running for City Council generally. As a member of the International Longshore and Warehouse Union, she is not willing to have the A’s come to West Oakland and thinks they should stay at the Coliseum. “It’s close to BART and gives people jobs.” If the A’s moved to the proposed Howard Terminal site in Jack London Square, “transportation would be horrible, horrible, horrible.” Taking a stand one way or the other on this is refreshing, given how many different candidates we have seen throwing up a shrug face emoji at this question in various candidate forums.

There may be no candidate website, but that doesn’t mean there’s zero web presence! Check out Taylor’s Facebook page for some campaign candids. We sincerely think her first selfie is very sweet (and way better than any of our first selfies!). Also, Taylor is unafraid to climb aboard over a thousand pounds of horse to take a campaign photo. 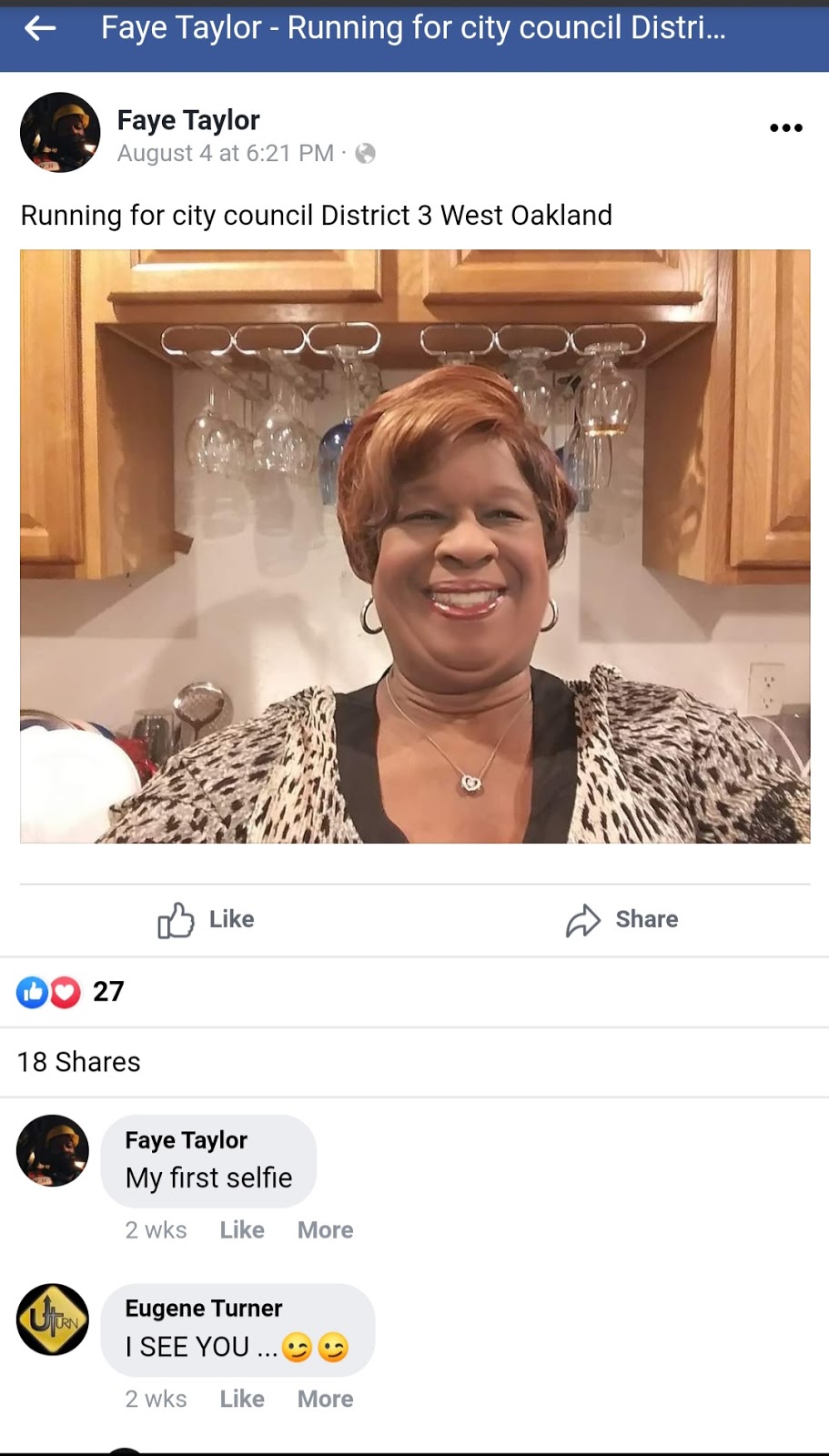 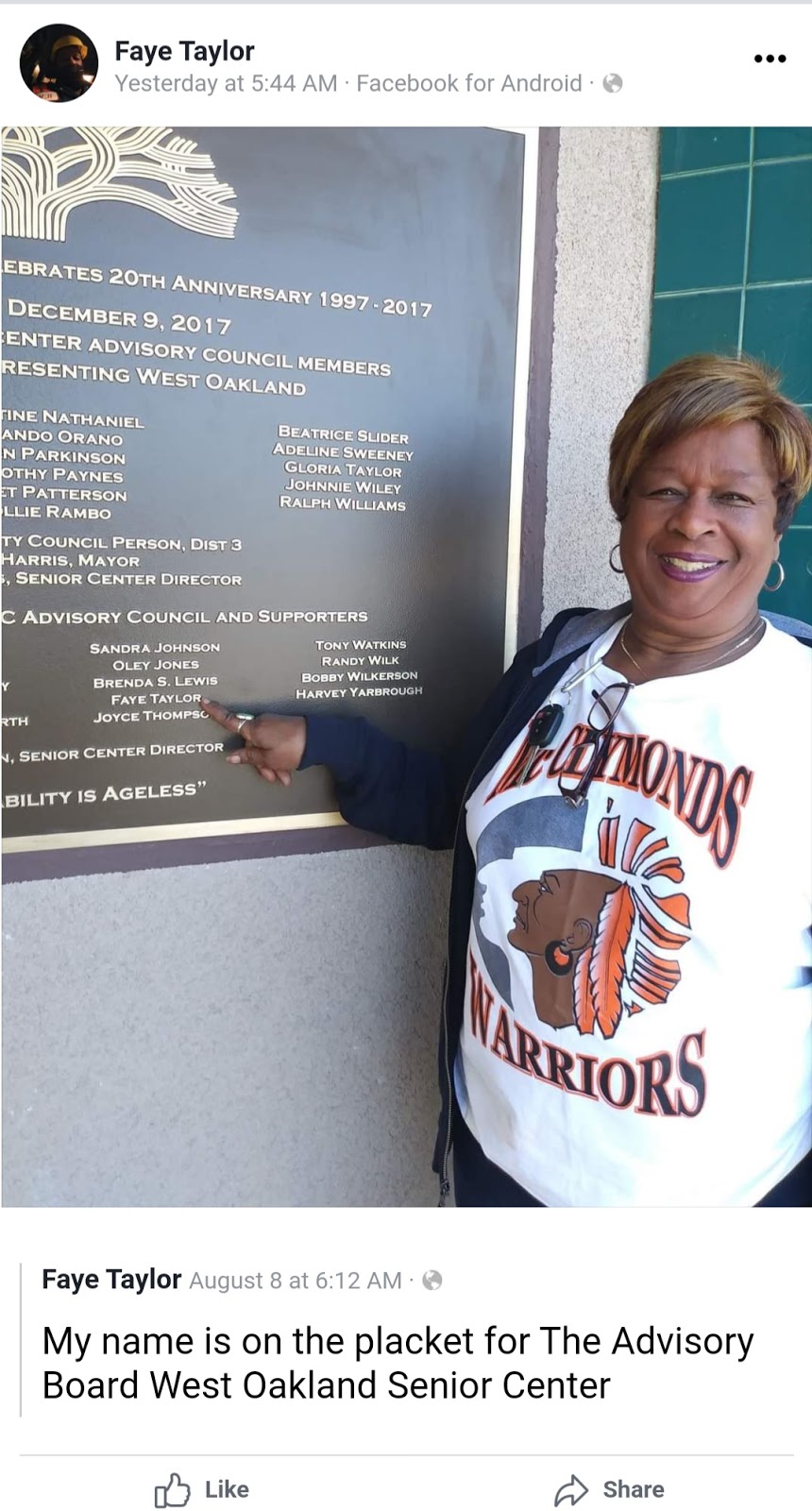 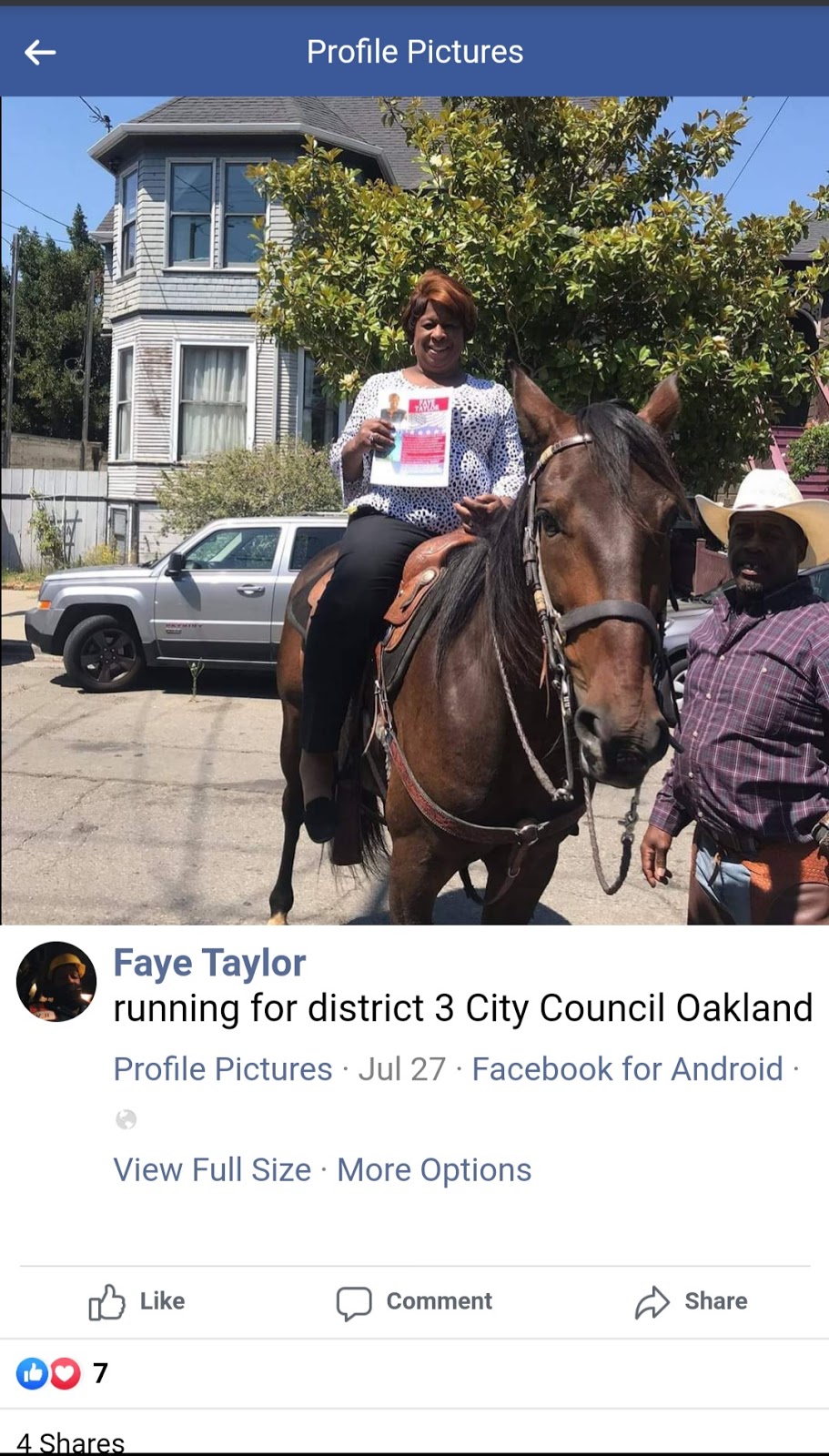