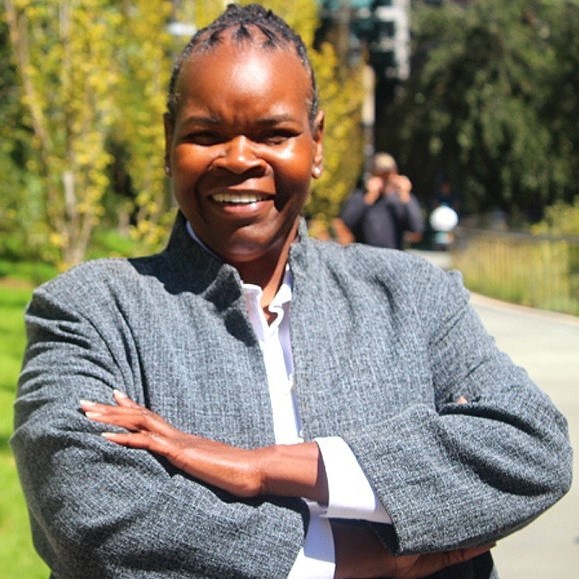 TL;DR: A former bus driver who’s run multiple times trying to give drivers a voice on AC Transit’s Board

Dollene Jones has been running for the AC Transit Board of Directors since 2010. She believes it is important to have a driver’s perspective on the Board. She owns a business called Abundance Worldwide Enterprises (not Abundance Worldwide Enterprise, the nonprofit based in Malawi). Prior to starting the business, she drove buses for 21 years for AC Transit and was a member in good standing of ATU Local 192 for the same length of time. You can meet her on Zoom at the AC Transit Board meetings the second and fourth Wednesday of every month.

In a self-recorded video for the East Bay Women’s Political Alliance (EBWPA), Jones laid out some of what she plans to do if elected. She observed that ridership is down (particularly because of COVID-19) and is having trouble paying its bills. She identifies procuring federal, state, and other sources of funding as her major concern. In her questionnaire for EBWPA, she added ensuring COVID-19 safety as another important issue of concern.

In previous campaigns, Jones has prioritized preserving service to neighborhoods of color and increasing seating capacity to decrease wait times during commute hours, as well as bicyclist and pedestrian safety.

As of this time we have not seen current endorsements for Jones. During her run for the AC Transit At-Large position in 2014, Jones did accrue a range of endorsements, likely because the then-incumbent she was challenging had been accused of multiple forms of impropriety and was not showing up for campaign forums.

Main vibe: Ready to represent labor and fight for equity. We love a candidate who puts achieving racial equity at the top of her priority list.