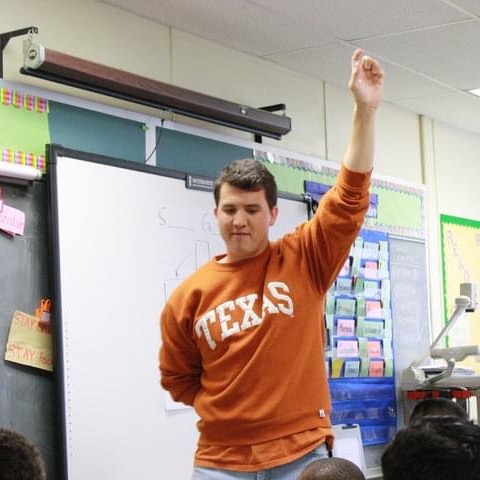 It’s unclear how long Austin Dannhaus has lived in Oakland. He taught third grade for two years in a public school district in Maryland just outside of Washington, D.C. as part of his Teach for America service. He is a partner at Friday, a consulting firm. He also teaches English to incarcerated adults with the Prison University Project at San Quentin.

Austin Dannhaus is distinct from the other candidates for District 1 OUSD Boardmember because he is primarily focused on “excellent student outcomes.” He wants OUSD to focus on literacy proficiency, personalised curriculum, and closing achievement gaps. He lists other issue areas–teachers, school leaders, infrastructure, financial reform, and charter schools–on his website, but in all of these he remains focused on student performance. Dannhaus’s platform is notable in that there are few references to OUSD’s contentious recent past, and it feels like it could be copy-and-pasted into almost any public school board race in California.

In an interview with the Oaklandside, Dannhaus said he is not as concerned about charter schools and school closures, saying, “They are important, but they are one of a whole host of issues.” Dannhaus said he is pro-merging campuses to integrate schools.

Main vibe: Only cares about test scores. Dannhaus’s website says all the right things about equity, but he’s singularly focused on student outcomes without saying how he would measure them. We’re worried this, combined with Dannhaus’s consulting background and emphasis on curriculum as a solution, means he would emphasize standardized testing results rather than supporting schools that work well for their communities.

Ready to spend public money on private consultants vibes: Maybe this is unfair, but when we see a stint with Teach for America followed by years with consulting agencies, we think this is a person less interested in building on the base public schools already have and more interested in endless, traumatic re-orgs to find new efficiencies. The fact that two of the Board’s out-going incumbents (and long-time Boardmember Gary Yee, bless his heart) have endorsed Dannhaus make it clear to us that a vote for Dannhaus is a vote for more of the same kind of management-by-expensive-consulting-firm we’ve seen for the past few years.

Fox in the henhouse vibes: Dannhaus swears he did not seek out campaign money from Mike Bloomberg’s well-funded PAC to support charter schools, but the beauty of PACs is that he doesn’t have to coordinate with them to benefit from their money. Dannhaus says he won’t approve more charter schools, but he also doesn’t seem to think they’re a problem.

There will be a candidate forum for this race on Thursday, October 8th at 6 PM.